The Society of Spectacle from the Inside Out 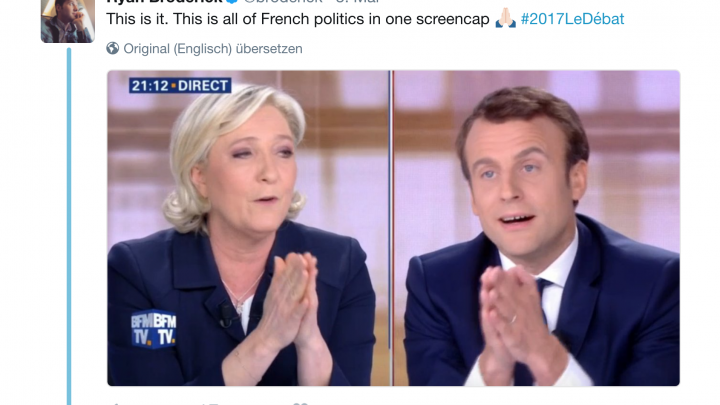 On Wednesday May, 3rd, like millions of people, I distractively watched the last and by far the most unpleasant Presidential Debate of the French elections. The two opponents,  Emmanuel Macron, who would become the future President the following week, and the candidate of the far-right Front National, Marine Le Pen, debated heartily but vaguely on several subjects, ranging from security to the future of France in the European Union.

The debate was more of a succession of childish insults in what looked like a theatrical play staging two ill-tempered children supervised by bored but resigned adults (the journalists‘ presence was barely noticeable), rather than an articulated, argumentative discussion confronting two political programs. Filled with sarcastic remarks, dirty games, personal attacks, most of it was a bland confrontation between pre-made, overheard anti-system formulas and the empty, normalized neoliberal remarks.

While the debate was broadcasted in the national television, another spectacle was simultaneously occurring on social media, where millions of internet users were sharing hilarious comments and memes from the debate. Faced with this abysm of representations of something that was an inherent representation in itself, I could only invoke Guy Debord’s major work, The society of spectacle, published in 1967.

According to Debord, the spectacle is the imposition of an external representation between “me and myself”, “me and others” and “me and my world, distorting any direct relationship with lived experiences, separating the individual from its own life, which becomes a passive consumer, a direct and concrete fabrication of alienation.

I am not sure Ryan Broderick, who tweeted the screen capture that is the cover picture to this post, is familiar with Debord’s work. But it is nevertheless a perfect illustration of its criticism of modern politics and their fake spectacular struggles, where forms of power struggles officially contradict each other while forming a real unity, a necessary representation of exposed rivalry necessary to the development of a uniform and homogenous system of representation.

In his comments of 1988, Debord highlights the culmination of the society of the spectacle, the integrated spectacular which represents the culmination of the excesses, the moment where spectacle and reality ceased to oppose, where the spectacle is mixed to all reality. As one internet user on twitter sarcastically said, the internet conversation around the debate reached such a pic of mockery and absurdity that people seem to be talking about the last reality show rather than a debate that could decide the country’s future. When any day of Trump’s presidency looks like the Apprentice with more unexpected plot twists and casting changes, when TV becomes reality, I could not help but wonder if social media add another level of spectacle representing the representation itself or if these remarks constitute the last act of parrhesia in our society, of speaking the honest truth, the whole truth (Foucault, 2001, p.348) which is that all of this is just a huge joke…on us.