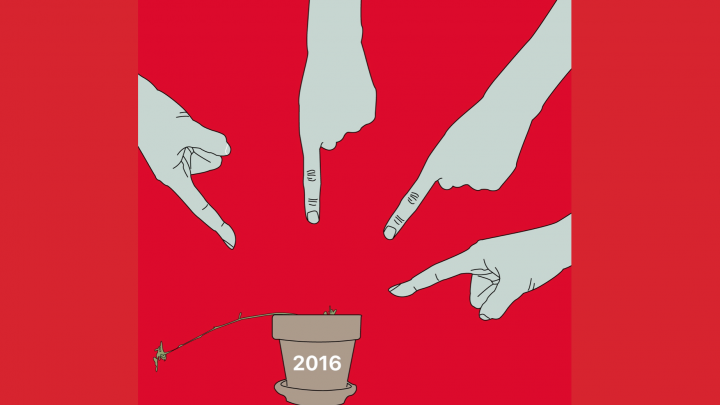 I do not need to inform you about the major events of 2016: Devastation in Syria, Brexit, President-Elect Trump, drug wars in the Philippines, and so on. For a refresher, see The Guardian’s summary of 2016’s top global development stories. In the past month, news sources and social media alike have been flooded with tales of The Evil 2016, anthropomorphizing the entire year into a wicked, plotting villain. Curses, angry music, and obscene memes have been directed at the year. Certainly, as a sustainability researcher, I have been taken aback by the threats to environmental and political progress made thus far. But is it enough to leave these events in 2016 in hopes of a better 2017? Would we not have a better chance of a brighter 2017 if we considered our own opportunities for action rather than blaming an arbitrary bracket of time?

On the one hand, there was social sustainability progress in 2016. For example, it has become more socially and scientifically acceptable to link environmental disasters to the aggravation of political conflicts, such as in the case of extreme drought preceding the Syrian civil war. On the other hand, in some sense, I believe the essence of active citizenship in sustainability aims has been lost on us. In the groundwork definition of sustainable development, participation is highlighted as a founding pillar: political and financial equality is desirable for encouraging the participation of all citizens in development efforts; the broader participation of individuals, scientific bodies, and non-profit organizations improves societal knowledge and thus development; and local, community-driven citizen participation is needed to contextualize sustainable development. But say that you are a citizen who is relatively politically and financially privileged; has knowledge and a voice to express it; and is rooted in some form of community, be it urban, rural, or something in between: What does it mean to participate? To be active? Well, part of being an active participant is that you have the freedom and responsibility to determine for yourself the nature of your involvement. That said I would like to offer some considerations for 2017 and beyond, based on recent citizen engagement developments.

The past several years have seen a rise in the design of choice architectures that encourage “good” — including  sustainability-oriented — behaviours. In other words, organizations, including governments, are working to set up decision making scenarios in ways that nudge you to make decisions they consider best for society. General examples of nudges in choice architecture include signs at your work entrance gently reminding you that choosing the stairs over the elevator is better for your health, or more aggressive devices that are programmed to shut off your apartment’s electricity when you have exceeded a desired usage level. Default rules, another form of choice architecture, refer to which choice is set up automatically for you before you make any active interference: such as whether you are signed up for your company’s 401k plan, or whether you demand renewable energy sources (as opposed to fossil fuel) from your utility company. When these scenarios are designed to favor environmentally-friendly settings, they are referred to as green default rules. Nudges work by suggesting choices for you, and default rules work by setting the automatic choice for you. Note the theme “for you”. Organizations are becoming more sophisticated at understanding and developing these techniques, as can be seen in the 2011 report for the UK government on influencing behaviour through public policy.

Oh hold up! What do these people think they are doing influencing our choices?! Well, unfortunately we have a tendency to not choose as we intend to when left to our own devices. For example, the green gap is a disappointing consumption pattern referring to the disconnect between the environmentally-friendly products consumers testify they will buy and what they actually purchase. We are also victims to the status quo bias, the phenomenon wherein we are most likely to accept whatever we are already accustomed to (harking the idiom “go with the flow”, ironically born out of the hippie era). As such, there certainly have been successful choice architecture outcomes, including with health food and waste disposal. I would also, however, ask you to question the longer-term, larger-scale impacts of allowing yourself to be distracted from active participation. For example, there is already some question as to whether Trump’s election was in some part due to Clinton’s label as the “status quo” candidate, furthering the assumption that business would carry on as usual and triggering a drop in voter turnout, down 2% from 2012 and 5,6% from 2008. Rather, it is those disrupted in their lives who dislodge the status quo, crack the mold, and form a new playing field.

The surprising thing to me about the recent popularity of choice architecture is failure to acknowledge that the choices being offered are not born out of the blue, dreamed up in a peaceful organizational slumber. Nay, these sustainability visions come from the same kind of dedicated activists who have been breaking the mold (arguably in the “bad” way) in 2016. For example, it is brilliant to simply automatically sign up everyone in the neighborhood to order electricity from renewable sources. But without a vigorous citizen-driven activism driving renewable energy first after the Oil Crisis 1978-9 and again with increasing climate change awareness, there would be no renewable energy production sites, no technologies for their construction, no advancement of their efficiencies towards market competition. It took a lot of work to offer the transmission of solar power to our comfortable couch-side lamps and laptops. Or another example is nudging communities to plant their outdoor spaces as bio-diversity supporting, fresh-air and nutrition-producing urban gardens, or nudging consumers to purchase locally produced groceries. But without the desperation of food shortages and community-driven reorganization of food access post-World War II, the concept of urban gardens and community-supported agriculture (CCS) would not exist.

Not surprisingly, such sustainability activism exists in 2016 as well. Here in Denmark, prevention of food waste has reached the national agenda and promises to expand further. All this, triggered by the persistent activism of Selina Juul, founder of the organization Stop Spild af Mad (English: Stop Food Waste), and the joining of more activists, such as 17-year old Rasmus Erichsen, founder of the app Stop Spild Lokalt (English: Stop Waste Locally), in what can be considered a social movement. Looking back again on 2016, we have reason to feel disrupted, enough drive for action. Please continue to engage in social media and write up your own blog posts about it, but also find yourself a practical, positive action that you can take. For me, I’ve chosen to pursue academic research in sustainable building (not practical!), but also to volunteer for trash clean-ups in nature areas and reduce my hot water usage at home. You do not have to make it your career, but you can take action for 2017. You can use your participatory power and be an activist for creating different, better choices for all of us in 2017.5, 2020.3, 2046.7, and beyond.

Lara is a PHD Fellow at the Department of Intercultural Communication and Management at Copenhagen Business School. Her PHD research is part of the Marie Curie network Innovation for Sustainability (I4S), with VELUX as a partner organization.