The F-Word in Denmark 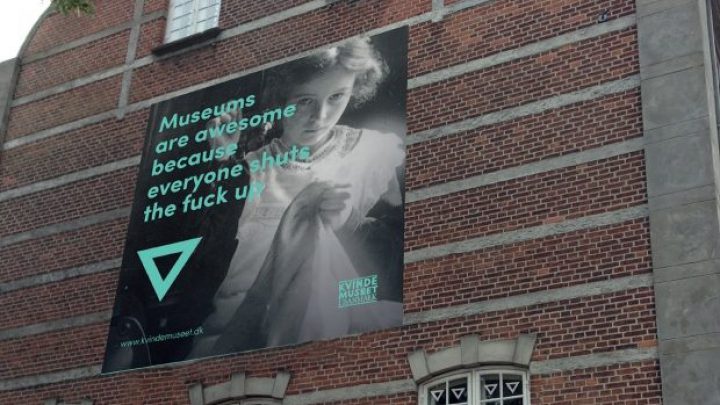 The proposed subtitle for this blog was ‘Why is it more acceptable to say ‘f**k’ in the classroom than ‘feminist?’’ but I thought it might be a bit too strong for most of your inboxes! But indeed, after some time working here in Copenhagen as an assistant professor, and living as a self-professed feminist, it is a question that has continued to perplex me.

No, the swearing doesn’t bother me, although many non-Danes find the embrace of swearing in the classroom, at work, on the radio and in adverts either hilarious, or offensive (by way of glorious coincidence, see the striking poster from Kvindemuseet (The Women’s Museum). Rather, I have on various occasions been told that using the other ‘f-word’, feminism, is taboo. Especially in the classroom. What’s interesting is that a warning over dropping the f-bomb in front of students usually comes from older friends and colleagues, both men and women. Don’t get me wrong, I’m not walking into a lecture theatre ranting about women’s rights, when what is scheduled is a session on corporate governance. But I AM researching and teaching about corporate social responsibility and sustainability, both topics that are inherently gendered and political. Sometimes it makes sense to mention the dreaded F-word in those contexts. And I think the fear of feminism as something we might talk about in business education comes from two places: a misunderstanding of what feminism is; and perhaps complacency about its need in modern Denmark.

The word ‘feminism’ often provokes expressions of mild horror. It conjures up grainy photos from the 1970s of women, living au natural in communes, ‘hating men’ (as one of my students put it). Others have suggested that being feminist involves rejecting high-heels, or make-up, or the desire to be a mother. When you put all that together (witchy, bra-less, slightly-wild single woman in a homemade dress?) I’ve no wonder my sessions on feminist theory might sound alarming!

For many people worldwide, this stereotype persists. Yet if we tone-down this characterisation, at it’s most basic, feminism is the fight for human beings to live their lives without their gender or sex hindering them from achieving what they wish to. This fight is hundreds of years old. Feminism is political, economic and social. It involves governments, international organisations, businesses, NGOs, and most crucially ‘normal’ people going about their everyday business: calling out that off-colour joke at lunch; tweeting about overly sexualised advertising; writing about online abuse or raising their children unconfined to gender roles. And yes, all whilst wearing make-up, or getting married, or being a feminist man- if one chooses to.

So that’s my take on feminism. Perhaps my surprise at the rejection of feminism was because I assumed that in one of the world’s most gender equitable countries everyone would be a feminist. But perhaps because Denmark is perceived in this way, the need for feminism appears to be over. Unfortunately this doesn’t quite seem to be the case.

Last week Denmark fell another four places down the World Economic Forum’s Global Gender Gapratings, from 14th to 19th place. Sweden, Finland, Norway and Iceland take the top four places, but their Nordic neighbour Denmark continues to lag behind. In 2014 an EU survey revealed that Denmark has amongst the highest prevalence of domestic violence within the EU. Yet these surveys reveal only part of the story. The fantastic Everyday Sexism Denmark post testimonies from women experiencing (you guessed it) everyday sexism, often in their workplace or school. All of this suggests that whilst on paper things often look good for women (for example, in excellent parental leave policies, and a growing number of women in senior roles), the reality is that men and women are often held to differing standards, and that this become so normalised, so ingrained, that we might assume everything is fine. Activists such as Emma Holten are pointing out that things aren’t equal, or equitable, and that perhaps Denmark has become disillusioned in this regard: “Our idea that everything is great and fine in terms of human rights and respectful discourse is actively combating our ability to progress in these areas.”

Emma Holten is symbolic of young Danish feminists using their own experiences, often with wit and humour, to reignite a conversation about gender equality. Slowly there’s been a resurgence in feminism in the last few years (albeit a lot slower than in the UK and USA), facilitated by social media. Facebook pages and Twitter accounts such as Everyday Sexism, Overheard Sexism in Denmark, Young Feministsand others collect thousands of likes, post and shares. I’m happy to report that closer to home Copenhagen Business School now has a feminist society enthusiastically run by students. Online lives spill into our offline lives, and within my classroom there is a genuine interest in discussing the role of feminism today- in politics, in the media and in business.

Some might argue we need a new term for the fight for gender equality, or that feminism excludes other, equally important social injustices. But the F-Word isn’t going away, it’s getting louder. Feminist theory offers lenses into understanding how social change happens, and continues to happen. The history of feminist activism demonstrates the politics of the everyday. And feminism is a living, breathing phenomenon that is being adopted once again- by people as diverse as Beyonce, Ban Ki Moon and Muhtar Kent (CEO of Coca-Cola). What does it mean when these people use the word? What does it mean for business? For feminism? If we’re going to teach and research how we might lead, manage and create responsible businesses, let’s throw out the stereotypes and explore modern feminism in 2016.

Lauren McCarthy is Assistant Professor of Sustainability and Governance in the Centre for Corporate Social Responsibility, Copenhagen Business School. She researches and teaches about gender and CSR in organisations and their global value chains. She is currently exploring online feminist activism in the UK. You can follow her updates @genderCSR .