Regulating 300,000 Years – Nuclear Waste, Sustainability and the Need to Talk to the Distant Future 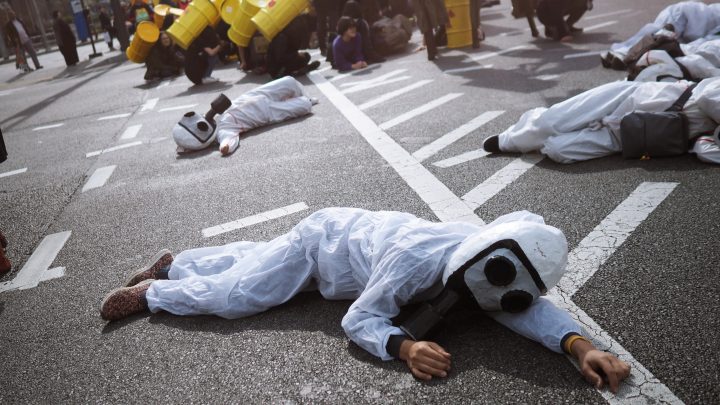 Whenever we think about regulating sustainability problems, we usually think about the here and now or at least about the not too distant future. Even with regard to climate change, which clearly is a problem for future generations, regulators have a time horizon of not more than 30 or 40 years. The Paris Accord is a case in point – it sets targets for 2050. Also, the European Union’s climate strategy sets goals until 2050. But, what happens if regulators need to think about a very distant future?

Consider the example of nuclear waste. The challenge is not only to find a secure location to store the byproducts of burning uranium. The challenge is also, and maybe most of all, to prevent future generations to disturb the deep underground storage facilities, be it intentional or not. This requires “talking to” distant future generations. Chlorine-36 (one of the byproducts) has a half-life of approximately 300,000 years. Compare this to the roughly 40,000 years that the behavioral homo sapiens is supposed to be around – i.e. human beings which engaged in the development of language and early forms of religion – and you get an idea about the scope and scale of the underlying challenge.

Deep underground storage is, at least as of now, the only option to deal with nuclear waste. In the 1980s, some governments considered the idea of simply firing nuclear waste into space. This idea was rejected due to security concerns. Right now, there are few final repository sites for nuclear waste, such as the US-based Waste Isolation Plant in New Mexico.

>>How do we secure these sites from future human intervention? What is needed is a way to communicate with future generations. <<

By definition, the future is unknown and we do not know whether future generations may try to dig at the sites where nuclear waste is disposed. There are many reasons why such underground storage sites could be interesting for future generations, ranging from pure curiosity to a danger that they misread/misinterpret warning signs or other artifacts. What will be a symbol of danger in, say, 150,000 years from now? How does memory survive?

Governments around the world have developed different approaches to talk to the future. One possible US solution includes giant granite markers that are supposed to prevent human intervention (see picture). The US Department of Energy writes:

“Regulations require that waste disposal sites use markers and other controls to indicate dangers and locations of waste.”

One problem with these giant markers is exactly that they are giant and that they are supposed to signal fear and danger. What, however, if signals of fear and danger incite curiosity? The US facility will not be closed until 2050, so there is still time to decide otherwise.

If a written message were to be attached to any warning markers, how would such a message look like? One current proposal is to use the message (see below) which is then to be translated into every written UN language. Although there is no consensus on the content and nature of the message among members of the Nuclear Energy Agency (NEA), it is clear that such a message needs to be developed.

“This place is a message… and part of a system of messages …pay attention to it!
Sending this message was important to us. We considered ourselves to be a powerful culture.
This place is not a place of honor … no highly esteemed deed is commemorated here… nothing valued is here.
What is here was dangerous and repulsive to us. This message is a warning about danger.
The danger is in a particular location… it increases towards a center… the center of danger is here… of a particular size and shape, and below us.
The danger is still present, in your time, as it was in ours.
The danger is to the body, and it can kill.
The form of the danger is an emanation of energy.
The danger is unleashed only if you substantially disturb this place physically. This place is best shunned and left uninhabited.”

An alternative solution would be to adopt a more evolutionary approach. Such an approach would not put the message into granite (or other materials). Rather, it would create “an enduring culture around the nuclear waste depositories.” (Financial Times, 14 July 2016) Keeping the memory alive, then, would be an accomplishment that is passed from generation to generation (e.g., via stories, exhibitions, songs, art). As language and symbols change over time, this evolutionary approach would adapt the message to the contextual particularities that evolve in the future. Such a community-based approach would then rely on locals, who live around a waste storage site, to warn others.

There are pros and cons for both approaches and it is uncertain what regulators will do. However, what this example shows is that thinking about regulating actions in the distant future requires drawing on insights from multiple disciplines, ranging from linguistics to nuclear scientists and anthropologists.

Does all of this have something to do with sustainability? Just think about a world in which we cannot securely seal nuclear waste…

Andreas Rasche is Professor of Business in Society at CBS and Associate Dean for the CBS Full-Time MBA Program. He is also Visiting Professor at Stockholm School of Economics. More at: www.arasche.com.

The Ethical Blindness of Corporate Sustainability

Photo by Ra Dragon on Unsplash