How is Ayn Rand still a thing? From ridicule to serious concern 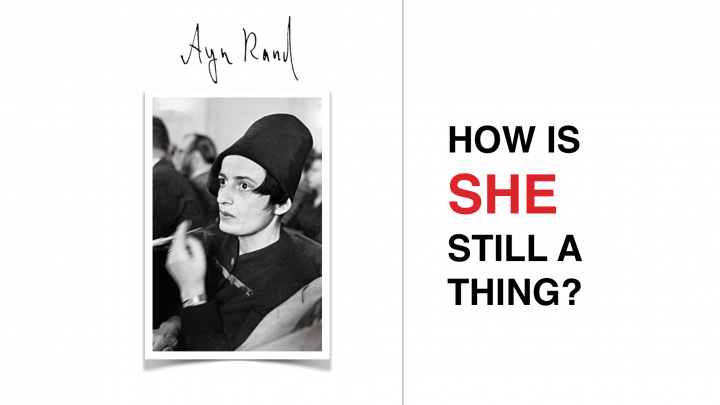 A recent article in The Washington Post informs us that Donald Trump is affectionate about the works of Ayn Rand (1905-1982), often referred to as the ‘high priestess of selfishness’. He shares this affection with several of his members of cabinet. These include Rex Tillerson, Secretary of State, Andy Puzder, Secretary of Labor, and Mike Pompeo, Director of the CIA. The speaker of the House, Paul Ryan, has also been an outspoken supporter of Rand, although he has recently distanced himself from her philosophy, citing its atheism as a fundamental concern (Rand famously viewed altruism as an evil form of self-sacrifice, and thus spoke against Christian values of giving and regard for others).

Trump has said that he identifies with Howard Roark, the main protagonist of Rand’s The Fountainhead, while Tillerson has listed Atlas Shrugged, Rand’s magnum opus, as his favorite book. The Fountainhead was made into a Hollywood movie in 1949, starring Gary Cooper as Roark, and this can of course lead one to speculate whether the president actually read the book or ‘just saw the movie’. This brand of speculation would, however, be typical of a tendency to ridicule rather than take Rand’s philosophy, its continued popularity and the influence it continues to have on the rich and the powerful seriously.

To name but a few examples of the ridicule: In 2009, the animated TV show The Simpsons had Lisa Simpson comment to her mother about The Fountainhead: “isn’t that the bible of right-wing losers?” In 2012, president Obama commented that Rand’s work is something that is picked up by teenagers that are “feeling mistunderstood”, and Last Week Tonight with John Oliver in 2014 dedicated a dismissive installment of “How is this still a thing?” to Rand’s work.

In popular treatments of her philosophy and the cult of personality that surrounded her, notions of ‘selfishness’, ‘greed’ and ‘objectivism’ are thrown around, but rarely with much argumentative depth. In scholarly circles, her work is often rejected as overly politicized ‘bad philosophy’, full of logical fallacies (and false distinctions), failing to constitute a coherent and closed system of thought (in spite of such pretense), and thus not deserving of more serious engagement. The literary form she uses in her major philosophical works also does not count in her favor among scholars. It can easily be dismissed as philosophical pulp fiction.

What I want to question here, however, is whether or how Rand’s work is deserving of more serious critical attention and treatment by those who are opposed to it. The idea is not to offer support or claim neutrality, but to lay bare the arguments presented in order to better understand and challenge their continued allure. In other words, Rand’s thinking continues to be an ideological force to be reckoned with, and we need to understand why and how it influences people, not least those in power.

Importantly, following Boltanski & Chiapello, the term ‘ideology’ should not be construed in the reductionist sense often suggested by Marxist uses, e.g., as a moralizing discourse intended to conceal material interests and constantly contradicted by practice, but rather as shared beliefs that are bound up with actions and hence anchored in reality. In other words, ideology must be considered as a practical concern with real effects (however loosely coupled with ideological precepts), not just as a mask veiling reality, a mode of deception or a sham.

Admittedly, Rand’s thinking is a hostile world to enter for non-believers. There are a number of reasons for this (apart from the endurance required to get through the 1100+ dogma-soaked pages of Atlas Shrugged). Objectivism is a closed philosophy, related to her mind’s work and reflecting her ideal world, a world that is often far removed from most people’s experience of the modern world. In spite of strong objectivist claims regarding Man’s mind and its relation to reality, her loyal followers often tend to ignore the obvious and to misrepresent reality when defending objectivist dogma. Objectivism is often associated with extreme/far-right political views, self-consciously flying in the face of political correctness and common morality and peddling the same sort of dystopian and polarizing view of the deterioration of American society that Trump campaigned on. However, the real ‘truth’ of Rand’s philosophy is to be found in her work, not in how various minions choose to carry her torch.

In Atlas Shrugged (1957), she creates a world in which industrialists, i.e., the prime movers, the makers, the traders, constitute a morally superior class of people. Opposed to these are the second handers, the takers, the looters, moochers, rotters of society. The industrialists represent everything that is good and capitalism everything that is proper in this world, but successful business people and proper market principles are persecuted by forces of envy and mediocrity operating under the flag of social responsibility. In Rand’s world, social responsibility is nothing but a battle cry for politically correct, collectivist-egalitarian and ultimately totalitarian schemes that are meant to keep great business people down by means of government interference and regulation. It is the way of the loser, who cannot make it in a man’s game of real market competition and who cannot cope with the innovative brilliance of the chosen few. Social responsibility and social welfare and progress are promoted by morally corrupt, hateful and obviously inferior people, whose actions are bereft of proper reason and any meaningful relation to reality.

In her depiction of an America that is falling apart due to lack of reason and totalitarianism, (and which in many ways more resembles her native Russia), Rand provides scathing critiques of the corrupted – and corrupting – forces of politics, government bureaucracy, science and media, the tyranny of public opinion and the lack of reason among the common people. Opposed to all this rot stands capitalism. To Rand, and her followers, capitalism pure and unadulterated is the solution to all imaginable ills of society. She offers a philosophy according to which selfishness and greed are virtues and nobody should ever feel ashamed about being successful.

We do not have to accept the claims of Rand’s philosophy or to sympathize with its underlying ideology to acknowledge that her dystopian world view has some resonance in regard to emla what we are living through right now. Besides, there is the matter of the continued influence of her thinking on the rich and the powerful. Atlas Shrugged portrays business people (the right kind) as innocent and by and large powerless victims of persecution and scapegoating perpetrated by a list of shameful characters ranging from government bureaucrats to spouses and family members. For one of the more extreme expressions of this message we can turn to a 1962 lecture where she asserted that: “In Soviet Russia, the scapegoat was the bourgeoisie; in Nazi Germany it was the Jewish people; in America, it is the businessman” (quoted in Weiss, p. 53).

It is interesting how this perplexing narrative of persecution apparently continues to inspire extremely rich and successful people (the 1%) – in spite of all their success and all their well-documented power, and the fact that the societal view of business people and business as an institution has changed dramatically since Rand wrote her book.

In sum, Rand’s thinking is probably more a part of the problem than the solution to many of the crises we are facing, but it nevertheless call for more serious engagement – even by those radically opposed to her extreme view of the virtues of capitalism and everything that stands in its way. As the saying goes: keep your enemies closer …

Steen Vallentin is Director of the CBS Centre for Corporate Social Responsibility (cbsCSR) and Associate Professor in the Department of Management, Society and Communication at Copenhagen Business School.

Pic of Rand by David Seaton, edited by BOS.