America, what now? Drawing Up a New Social Contract 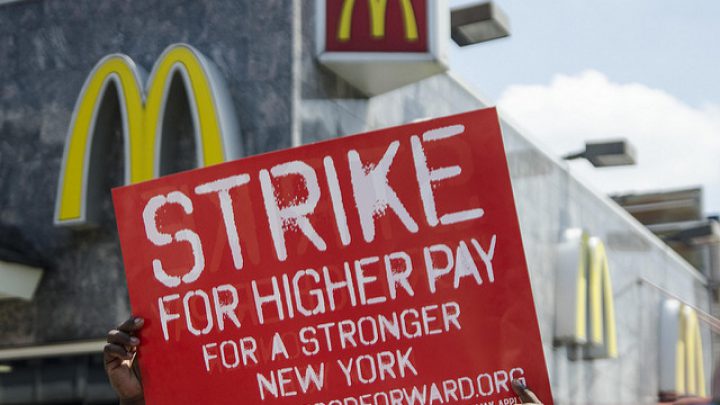 By Thomas A. Kochan.

The recent US election exposed two major intersecting fault lines in America: the deep divisions across racial, ethnic, and gender groups and the feeling of being left behind by the economic forces at work resulted in pervasive anger and frustration and gave room for hate crimes across the country. If left neglected, this situation could soon shift to produce an era of social and economic turmoil that could make the Arab Spring look mild in comparison.

The key to break the pattern, as this article will explore, is in mobilizing all sectors of society  to create good quality jobs and get wages moving upward again for all groups. In short, America needs a new social contract attuned to the needs of today’s workforce and economy that is, once again, based on mutual respect.

America’s social contract broke down in the 1980s and the failure to replace it is a root cause of the wage stagnation, anger, and political divisions the election campaigns brought to the fore. With the election of Donald Trump and a Republican majority in Congress, we should suffer no illusions that the process of building a new one will be led from Washington, reaching for the goal to ‚Make America Great Again‘.

However, this does not mean progress can’t be made via a different route. Indeed, history shows that most social and economic shifts don’t begin with a national policy, as Supreme Court Justice Louis Brandeis famously indicated: When treating stated as our “laboratories for democracy”, they function as places where innovations and social movements are born and tested for their ability to address emerging tensions. Ideally, those tensions turn into national policies before they escalade and explode.

In fact, groundwork to America’s last social contract was laid by workers themselves. In the first few decades of the 20th century, Sidney Hillman, then the leader of the Amalgamated Clothing Workers Union, organized immigrants and developed the basic principles of collective bargaining. Around the same time, women like Susan B. Anthony and Carrie Chapman Catt led the suffragettes movement to get women the right to vote.

With the help of Professor John R. Commons, who has been called the intellectual father of the New Deal, and his students of the University of Wisconsin, state level innovations had been shaped, leading to states like Wisconsin, Massachusetts, and New York enact unemployment insurance, minimum wages, and overtime protections. He and his students went to Washington to assist President Roosevelt write the innovations into the national laws that helped end the Great Depression. In turn, that laid the foundation to spread new wage norms through collective bargaining that succeeded in moving wages up in tandem with productivity to achieve an expanding middle class.

Now that the old social contract ultimately broke down, it is time to begin the long process of building a new one fitted to today’s economy, workforce, and society.  The good news is we are once again seeing substantial innovations in workplaces, local and state government, businesses and education settings that, if accelerated and expanded, could identify the key features of a new social contract.

The Workforce is leading the way

Grassroots initiatives are on the rise, and with the help of labor organizations, community coalitions, and what we might call worker centered entrepreneurs, achievements like the “Fight for 15″ are made possible. In this labor movement, the Service Employees International Union and a community coalition in Seattle have now induced another eighteen states to increase their minimum wages by varying degrees.

These developments pressured low wage companies like Walmart, McDonalds, and the Gap to increase entry level wages above the required minimum. IKEA has even gone a step further in committing to meeting objective standards for paying a “living wage” in all its locations.

Other new worker advocacy groups like Coworkers.org are using information campaigns and social media and other technology-aided apps to induce companies like Starbucks to reform scheduling practices to provide more advance notice and certainty over work schedules.

Unions and worker centers around the country are working together with immigrant groups to enforce their labor rights and protest wage theft (failure to pay minimum wages or overtime) while opening up their apprenticeships to more women, minorities, and immigrants and supporting efforts to promote “common sense” economic strategies that provide good entry level jobs and career ladders.

Lastly, a number of entrepreneurial tech-ventures are starting up around the country. One of those is Workers’ lab, a start-up incubator helping workers to leverage technology and platform-based strategies as a means to build bargaining power. Out of these and yet to be invented strategies might just come the next generation tech-savvy, grass roots labor movement.

How can business help?

Business leaders are slowly beginning to get the message that the era of prioritizing shareholders over all else may be coming to an end. The intense focus on maximizing short term shareholder value might account for one of the principle reasons the old Social Contract broke down.

The good news is there is growing consensus that this needs to change. No one less than J.P. Morgan Chase CEO Jamie Dimon said last summer that he would raise his employees’ wages because doing so is a good long term investment. He and his peers should apply the same logic advising their clients. By encouraging long-term investing, they could help end the short-termism that has held back corporations from investing in the workforce training and research and development that are so essential to job creation.

Wall Street could also help lead the way and perhaps in concert with labor by creating infrastructure funds that will generate a good rate of return for their investors and for the economy. Business, labor, economists and President-elect Trump, recognize the need and value of repairing the nation’s infrastructure. This constitutes a perfect opportunity to demonstrate the power of bipartisanship, public-private partnerships, and business-labor cooperation.

Some main street business leaders are already doing their part by competing on the basis of high productivity and high wage strategy. Research evidences both good profits and the creation and support of good jobs for American workers. This type of employers emphasise the importance of collaborating with labor and workforce partners.

The role of education

In today’s knowledge based economy, education leaders need to be counted as among the key stakeholders critical to building and sustaining a new social contract.

They and some philanthropic leaders active in funding education innovations are embracing what evidence tells us: There is nothing more important to educational attainment than a good teacher.  And in states as Massachusetts, New Jersey, and Illinois, teacher unions and education leaders are working together as partners to expand learning time, support teacher development, encourage online courses and helping workers refresh their skills in a fast-changing wold. These efforts should be extended across the country.

If knowledge is power, then these educational innovations will equip today and tomorrow’s workforce with the tools they need to meet the challenges they are bound to experience over the course of their careers.

Seeds of a new social contract

What’s needed next is to bring these different stakeholder groups together to learn about what is working and how successful innovations can inform national policy makers.

Here at MIT, we are doing exactly that. Our efforts are meant unite innovation leaders and stimulate research, share experience and come up with solutions based on learning that are meant to be diffused.
Together with the Hitachi Foundation, we have started a “Good Companies-Good Jobs Initiative” that is supporting efforts to improve relations and better manage and resolve workplace conflicts.  As we expand our efforts, we hope to serve as a catalyst for further innovation that will show the nation’s leaders what a new social contract might look like.

But more than anything else, we all should continue to encourage local activism, protest, and innovation. It may take a serious eruption of the now visible fissures to generate positive action in Washington.

Thomas A. Kochan is a Professor at the MIT Sloan School of Management and Co-Director of the Institute for Work and Employment Research where he teaches an online course on the future of work. He is author of Shaping the Future of Work:  What Future Worker, Business, Government and Education Leaders Need to do for all to Prosper. He is on Twitter.