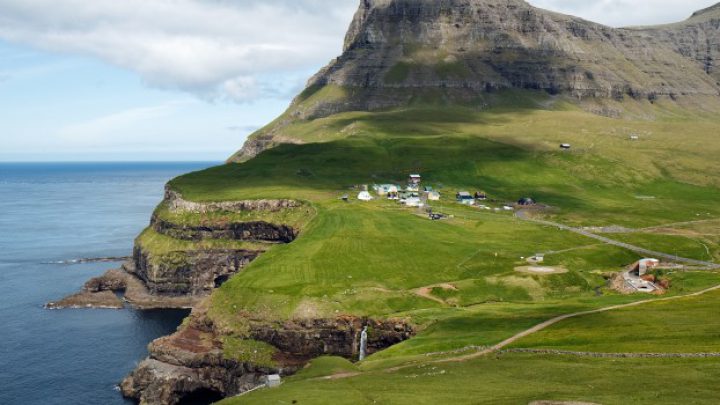 The Faroe Islands are economically dependent on a clean environment for their fishing industry but up to now the community has not challenged the potential downsides of the Faroese oil industry. The consequences of the oil industry could have negative effects on the nature and thereby the future of the community in the Faroes. Why do the downsides not concern the local people? Is it ignorance? Is it the hope for a wealthier future? Is the progression within the oil industry an irreversible process? What is your take on this?

Visit Faroe Islands has promoted Faroe Islands as a unique travelling destination. Located in the North Atlantic Ocean between Scotland and Iceland, the islands have a nature, culture, authenticity, remoteness, and openhearted inhabitants unlike any other, that could be summed up in the words; unspoiled, undiscovered, and unbelievable. The Faroese people are proud of their culture and natural environment (Faroe Islands were elected “World´s best islands” to travel to in 2007, National Geographic Traveler, among 111 destinations).

Since the early 90´s the oil industry has flourished in the Faroes. Although the explorations and offshore drillings of the sea bedrock have not been found sufficient yet, the industry is currently evolving because of the Faroese service sector supplying the local and international oil industry. After two offshore drillings in the summer of 2014 an oil rig (platform) found its way into one of the fjords, where it was repaired – and then sent off to Canada for another offshore drilling. The reparation of the oil rig created employment for a great variety of craftsmen and other businesses in the service sector in the Faroes, and the Faroese people are proud to finally see some results – after so many years.

On one hand the oil industry has brought great excitement in the local community, and the media has mainly reported positive stories about the job creation, the learning it involves, future opportunities and development. The reparation of the oil rig has been regarded as a general test to prove major actors in the oil industry, that the Faroes can provide services of this scale. The test will potential make way for future reparations of oil rigs from the oil/gas fields on the British side of the border, because of the shorter trip to the Faroes than to Norway – and at a lower cost of labor. There is also the future opportunity for oil rig and tanker demolitions to take place in the Faroe Islands.

On the other hand there has been no debate in the local community about the possible pollution of the fjords and natural environment. As the Faroese economy is very dependent on fishery they are also dependent on a clean environment. And the islands are been promoted as clean, untouched and beautiful natural environment – but how does this fit with a very big oil rig in that same nature? What are the possible consequences associated with a demolition site and scrap yard? How much can the unspoiled nature tolerate before it becomes spOILed?

Photo can be collected here