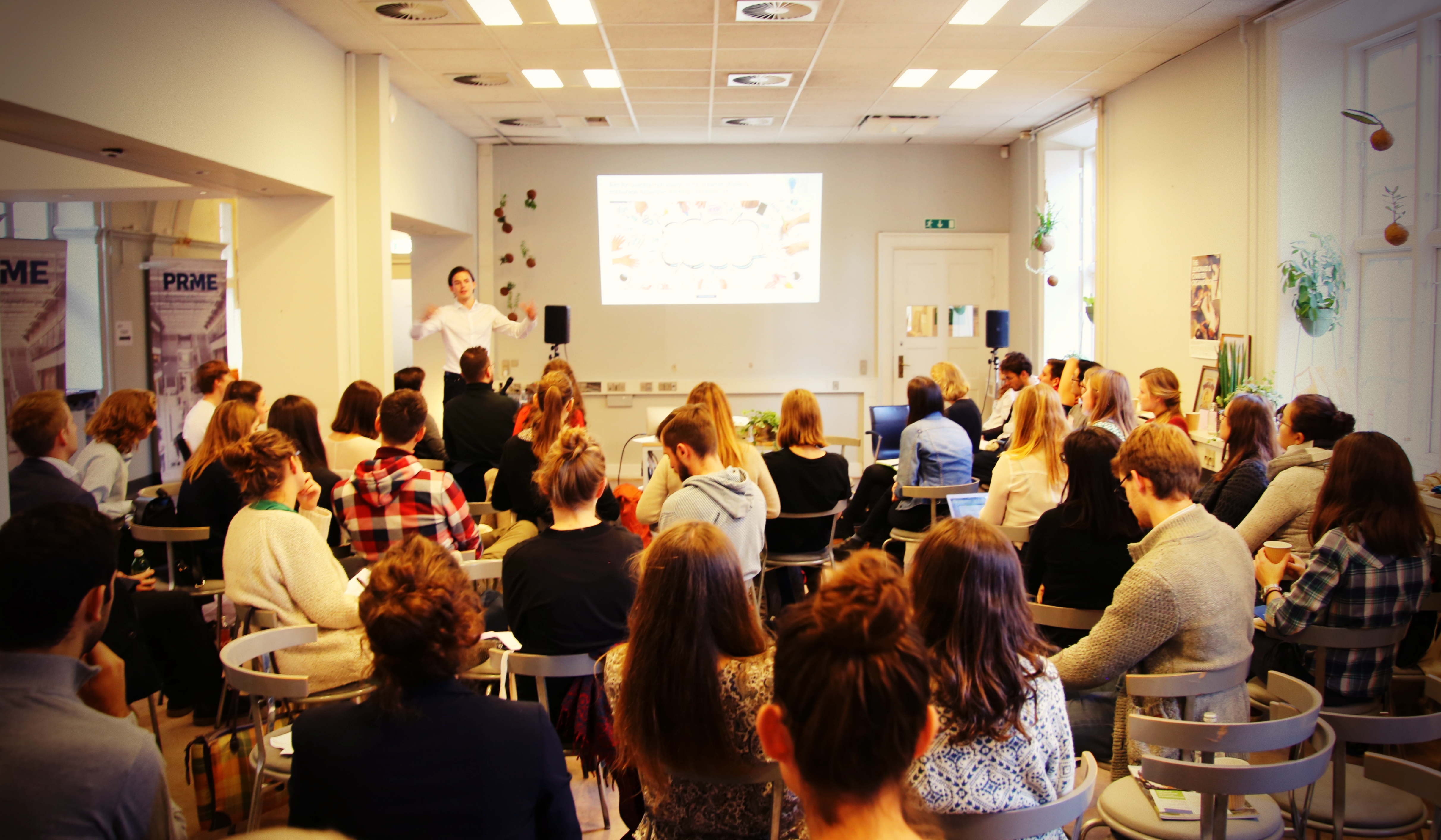 November 16 – 18, 2017 marked the beginning of a student-driven innovation era at Copenhagen Business School. The Student Innovation House – in collaboration with Oikos and PRME – hosted their first major event, the Sustainable Campus Hackathon 2017.

A Hackathon for more campus sustainability
Having received an impressive 120 applications to participate in the event, 66 students from universities across Denmark were invited to join an intensive 2.5-day spree of hacking sustainability ideas in four UN Sustainable Development Goal areas: Green Infrastructure, Healthy and Sustainable Food, Diversity and Inclusion, and Human Well Being and Mental Health. The goal? To come up with an idea that is feasible, implementable, scalable, and imparting a big impact; and the winning proposal will be further developed and implemented on the CBS campus next year.

Not all SDGs are created equally…
Perhaps not surprisingly, one of the first challenges was that not all SDGs are created equally, at least not in terms of student interest. Fully half of the students formed groups competing in the Healthy and Sustainable Food area, leaving Human Well Being and Green Infrastructure perfectly fitted with teams, but Diversity and Inclusion completely empty. I can’t help but wonder what this says about what is being integrated into students’ curriculum, especially in regards to sustainable development. Many students, during our “speed dating” for forming teams, remarked to me that they had recently had some courses relating to food systems and circular economy, and that this inspired them to innovate in this arena. Are we not giving gender equality the sustainability context – or even the examples of success and impact – that attract students to think critically and generate solutions for the future? Perhaps this in part is a reflection of Denmark’s rapid slide down the rankings.

Hacking the SDGs – with dedication, creativity & open minds
But by and by, teams drew from a hat, and we were sorted out. The next 36 hours involved input from experts, brainstorming, drafting, brainstorming again, and ultimately “hacking” the SDGs. My group’s subject area was Human Well Being and Mental Health, and my teammates hailed from Danish Technical University and Roskilde University. Their approach to the task was impressive: on the one hand they were hard-working and dedicated; and on the other hand they were playful with ideas and throwing around true creativity. It didn’t seem to bother them that the winning proposal would not directly, or at least immediately affect their universities. Rather, they were there to work on inspiration, on their own knowledge, and on collaboration. Beyond opening minds within teams, individuals across teams chatted over breaks, and mentors circled around, getting to know the breadth of people and ideas represented.

A playful approach to raise awareness around gender (in)equality
The hackathon was set up so that teams first presented for four minutes in a “heat”, and then were judged if they would be one of four teams proceeding to the finals. Notably, one of my favourite presentations was within the Diversity and Inclusion category. The team proposed circulating a quiz concerning “How much will you earn after your degree?” Respondents would enter their degree programs, age, experience, and so forth, and then be presented with their expected monthly wages. But then a pop-up would ask the user’s gender. If the response was male, the quiz would say “Sorry! We were mistaken. You will actually earn more than those who are not male!” and if the response was female, “Sorry! You will actually earn less than that, and less than your male counterparts.” This quiz idea is indeed a clever way to promote critical awareness, and hopefully more discussions concerning gender equality on campus (especially at CBS, where more than 80% of full professors are male).

And the winner is… Everyone!
Ultimately, the winners of the hackathon were Team Supo, who propose a student card-linked electronic point system for registering and incentivising sustainability actions, such as choosing to cycle to campus. Team Supo will be sent on a trip to New York, where they will expand upon their idea to the head office of PRME. Indeed I look forward to the implementation of their idea, but truth be told, the brilliance of a hackathon is the way it cracks open so many ideas, and brings together so many people. Supo will not be the only reason I’ll be back at Student Innovation House, as there are many more hacks – formal or informal – yet to come.

Lara Anne Hale is a former PhD student at Copenhagen Business School’s Governing Responsible Business World Class Research Environment. Her PhD focused on Experimental Standards in Sustainable Building as part of the EU Innovation for Sustainability project with VELUX. Follow her on Twitter.