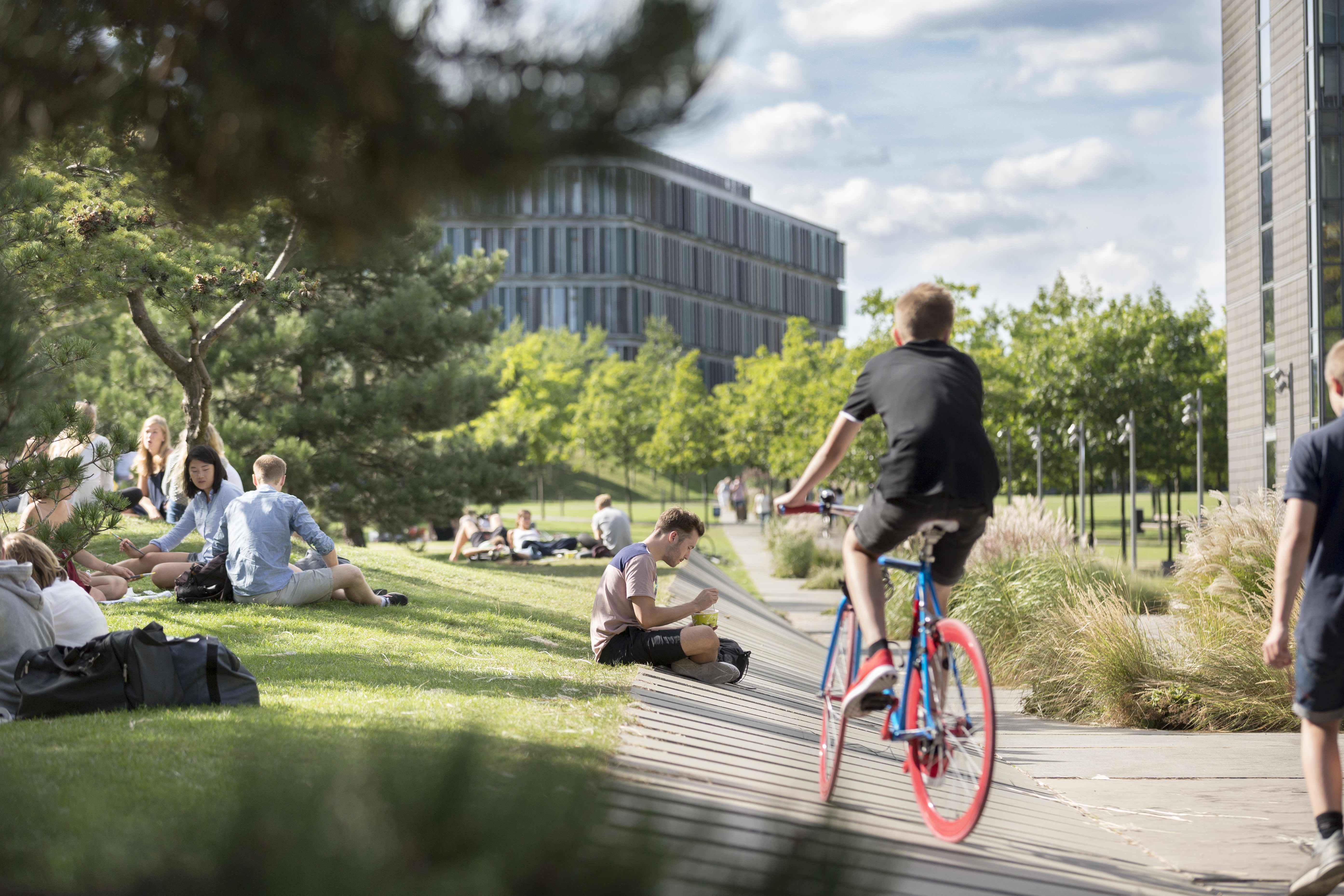 Universities are knowledge generators, facilitators of innovation and play a key role in shaping the mindsets and developing the skills of our future leaders. Universities bear a tremendous responsibility for not just talking the talk, but also for walking the walk on social responsibility. However, when visiting a university campus, it is not always commonplace that we find universities in the forefront when it comes to acting sustainably and responsibly.

Universities proudly take on the role of advisors in setting universal guidelines for how others should act, but how good are they when it comes to implementing sustainability initiatives on their own campuses? The CBS campus is a wonderful place to take a stroll around, especially on a hot summer day, where you will be greeted by the sight of the students sitting on the grass and enjoying the green areas. You will quickly discover that CBS is a real Copenhagen campus with bikes as far as the eye can see. However, as with many universities, the CBS campus has a long journey ahead when it comes to implementing sustainability initiatives and decreasing CO2 emissions.

The pressure is on
Every third year, the Minister for Education and Science negotiates the new university development contracts, setting the goals for all Danish universities’ future development. The contracts contain self-defined targets by the individual institutions, reflecting their own strategic priorities as well as obligatory targets based on societal needs as defined by the Minister for Education and Science. However, until now, these contracts have mentioned no legal obligation for universities to implement sustainability initiatives on campus. Universities’ lack of focus on sustainability initiatives on campus is somewhat surprising. You would think that there should be considerable pressure on universities to show a higher degree of engagement on campus regarding sustainable development considering the growing concern and initiatives globally.

The dominating theme at Rio+20 was how to achieve environmental and social sustainable development globally. The green transition is also a leading theme for the Danish government with its ambition of having Denmark ranked as the top country worldwide for green initiatives. The green transition is reinforced not least by the recent adoption of the EU Action Plan for Circular Economy. In 2015, the world adopted the 17 Sustainable Development Goals aiming to engage governments, the public sector, civil society and universities to bring about global sustainable development and in November 2016, the Paris Agreement entered into force with 158 ratifying parties working towards the goal of staying below 2 degrees.

There is no doubt that there is a growing demand for better standards for sustainability and resource efficiency. Yet, if we are to achieve the highly ambitious global targets, we need drastic changes and stronger commitments by key actors. Considering universities’ crucial societal role in educating the generations, you might wonder what keeps universities from taking up this challenge?

CBS Goes Green – or did it?
In 2012, an initiative known as the “CBS Goes Green” was launched to, among other things, allow for waste sorting for the students at Solbjerg Plads. Today, 5 years on, waste sorting has still not been implemented at Solbjerg Plads or any other of CBS’ main buildings. This is generally explained to be due to “a lack of interest by the students”. Another explanation has been prior lack of waste sorting systems in the municipality of Frederiksberg. However, today Frederiksberg has a well-functioning system including clear guidelines as well as consultation services for correct waste sorting. With no clear strategy for handling waste (such as plastic, bio and metal) within the various CBS departments, it appears that sorting waste is difficult not only for students, but for staff and faculty as well. Despite often good intentions, the systems for sorting waste are generally lacking.

You might wonder why sorting your apple core from your paper trash is such a challenge when most do it at home. It seems as if the challenge lies within some rather old, out-of-date structures and a “this is how we have always done it” approach. Despite the fact that sustainability is a growing priority for universities all over the world placing a strong focus on teaching and research in this area, not many universities commit to integrate operational sustainability on campus.

Universities as test centers for sustainable initiatives
Universities are in many ways a powerful platform and a crucial component for achieving sustainable development across the globe, but also very importantly, locally, on campus. Universities have a responsibility as role models to lead the way and show students how to act responsibly. There are also long-term economic incentives for taking on the challenge.

In 2008, Copenhagen University adopted its first Green Campus targets and has since saved DKK 35 million on energy. The University of British Colombia is treating their campus as a living lab for students to work with behavior and innovation to develop sustainable solutions for the campus. They have launched The SEEDS Sustainability Program with the aim of advancing campus sustainability by creating partnerships between students, operational staff, and faculty on innovative and impactful research projects to be implemented on campus.

CBS has just launched a similar initiative, The Sustainable Living Lab, a project that opens up campus data for students, researchers etc. to use the campus to implement, test, research and teach sustainability with the CBS campus as the focal point (campus as a living lab). The Sustainable Living Lab project engages student organizations to create a better and greener campus, but we need CBS staff, faculty and management to contribute directly to projects like this if we want to transform CBS into a more sustainable university. However, we do see small steps towards a sustainable movement internally at CBS, with the recent establishment of the Sustainable Infrastructure Taskforce at the Department of Management, Society and Communication. Among others, the taskforce has set out to implement waste sorting using the department as a pilot project and in time use this knowledge for similar initiatives around campus.

Reflecting on CBS’ role as a business university with significant social science expertise, the unique focus of the CBS approach is its emphasis on business and societal dimensions that we can make use of for a sustainable campus redevelopment. There is a tremendous opportunity for universities to play a key role in this sustainable transition in terms of research, economical benefits and branding of universities as green contributors just to mention a few.

I believe, it is time we started redefining the role of universities in the sustainable transition and engaging students and staff alike in the journey towards creating a green campus.

Louise Thomsen is Project Manager for CBS PRME and the VELUX Chair in Corporate Sustainability at the Department of Management, Society and Communication, CBS. Her areas of interest are sustainable consumption, innovation, student engagement, education and partnerships for sustainable development. Follow her on LinkedIn and Twitter.