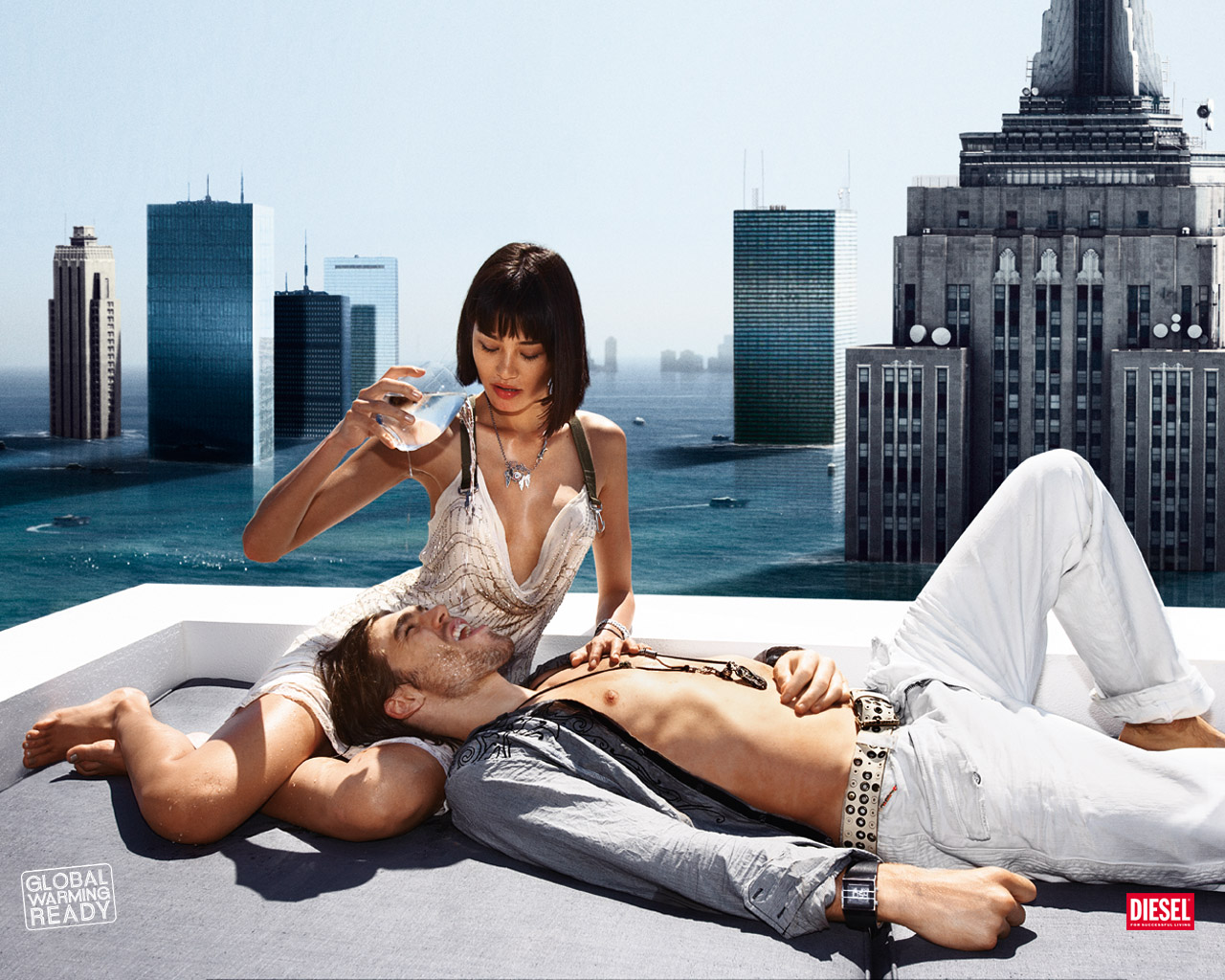 By Sarah Glozer and Mette Morsing

Do you feel uneasy to think that companies use a humorous tone in their communications about grave challenges such as climate change, pollution and inequality? We suggest the notion of helpful hypocrisy to coin this new ironic turn in recent corporate communications.

We have ourselves been intrigued by this new ‘ironic turn’ in corporate communications. Large international fashion brands such as Patagonia, Benetton and Diesel have recently challenged conventional informational approaches to marketing communication about sustainability, choosing instead to incorporate a humorous (or more precisely, an ironic) edge to their visual representations as they address issues of climate change.

Such campaigns are ironic because they bring a twist of message incongruity and ‘double talk’, where they show a world within which ambiguity, incongruity and contradictions are real and leaving it to consumers what to make of it. This stands in sharp contrast to conventional prescriptions in marketing communications where the idea of ‘one message’, or what we refer to as ‘single talk’, prevails with the purpose of targeting consumers effectively. In our recently published paper, we suggest the term ‘helpful hypocrisy’ as a way of coining the ironic turn.

On the one hand, these new ironic messages show consumers the dire consequences of pollution, climate change, flooding and deforestation (i.e. implications of consumption) and on the other hand, they simultaneously carry strong aesthetic appeals to enjoy life and consume more, comforting consumers that ‘life goes on’ and hedonistic lifestyles will continue. In new ‘twisting’ advertising campaigns, companies blend these two narratives in complex, ironic visualization.

Such double talk is often deemed hypocrisy and greenwashing in research as well as in practice. And while we agree with such assessment, our analysis shows that there is also something else going on.

We point to how such double talk may also provoke critical reflection and surprise through displaying inconsistencies between ‘talk’ and ‘talk,’ and hereby engage its audiences as more than passive recipients. In a cosmopolitan context, where people like to think that they are able and capable of critically reflect on their own lives and make their own decisions, preaching and moralizing communications about ‘good behavior’ is becoming increasingly less effective.

Youth is particularly opposing being told what to do. And even in spite of the severe consequences of continued consumption, a certain ‘climate change fatigue’ has entered the market. Consumers know that they should buy less and more sustainable products, but they are resistant to messages that give them feelings of guilt and shame.

In such a world, we suggest, one way to gain traction is to engage audiences in ironic and humorous communications in which the receiver is him- and herself activated to interpret incongruous ambiguous messages.

Analyzing Diesel’s Global Warming Ready campaign, we find how the technique of irony is particularly outspoken as beautiful people in beautiful clothes are inserted into out-of-place environments, juxtaposing them if you will, by the dire implications of climate change, in a way which makes the whole scenery appear absurd.

In our analysis, we develop an analytical model that positions irony and double talk vis a vis conventional marketing campaigns.

We point to how the blend of climate change and luxury consumption is an ambiguous affair, and we show how incongruity is present across four levels of Diesel’s use of irony: fantasy versus reality (framing), survival versus destruction (signifying), utopia versus dystopia (symbolizing) and political activism versus consumer society (ideologizing).

Now, we are not fooling ourselves. Diesel is a company with an ambition of selling more products. And where satire is a technique that intends to improve humanity by critiquing its ‘follies and foibles’, companies are generally known to have less noble ambitions.

But we argue – with Swedish sociologist Nils Brunsson – that “hypocrisy appears to be exactly what we demand of modern organizations: if we expose organizations to conflicting demands and norms, and expect that they should respond to them, then we must also expect hypocrisy” (1993: 8-9).

We propose that irony may be considered a means of ‘helpful hypocrisy’ in which the public is exposed to the contradictions and vices of society with the purpose of changing people’s opinion and create betterment of society.

Brunsson, N. (1989). The Organization of Hypocrisy: Talk, Decisions and Actions in Organizations. Wiley.

Sarah Glozer is Associate Professor of Marketing and Society in the School of Management at the University of Bath, UK. She is also Deputy Director of the Centre for Business, Organisations and Society (CBOS). Her research focuses on corporate social responsibility (CSR) communication, digital marketing and ethical markets/consumption.

Mette Morsing is Professor and Mistra Chair of Sustainable Markets at Stockholm School of Economics (Sweden) and Professor of Corporate Social Responsibility at Copenhagen Business School (Denmark). Her research concerns how organizations govern and are governed in the context of sustainability. She is particularly interested in how communication, identity and image dynamics work in this regard.

The image is one of the eight images displayed in Glozer & Morsing (2019) from the Diesel Global Warming Ready campaign: New York City submerged in water