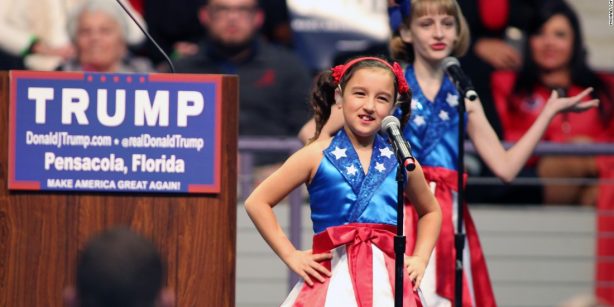 How did a brand magnate reality TV star with a vindictive style and no political experience become president of the United States? Why did so many people vote to ignore climate change, pull back from the global economy, and disrupt North Atlantic relations?

A few years back I asked a colleague in Italy to explain Berlusconi. He pointed to a corrupted and dysfunctional political system that angered voters enough to throw a bomb into government. Never mind that Trump, like Berlusconi, oozes a special corruption all his own. Most of the press and party elites missed the scale of angry emotion aimed at them by white working and middle class Americans. Indeed, the cosmopolitan press had long rendered these folk nearly invisible, brushing off the early warning signs of the Tea Party as a minor disturbance. And so, most media experts and party insiders engaged in knowing discussions of how impossible it would be for anyone to be elected with Trump’s combination of inexperience, shady business dealings, and inability to manage his emotions and stay on script.

Meanwhile, Trump found and fed the white anger with simple, emotional messages, such as the promise to “drain the swamp” in Washington. He branded “Crooked Hillary” as the ultimate insider, with close ties to the banks, a trail of (largely manufactured) scandals, and trouble drawing a line between official business, the Clinton Foundation, and her ties to Wall Street. Despite the baggage that Clinton carried through the campaign, she did win the popular vote, and might have won the election had the (Republican) FBI director not renewed an investigation of her handling of official emails as Secretary of State.

This was the “October surprise” that sent many undecided voters, including a majority of white women, to Trump. Clinton tried in vain to get policy messages into the news, but Trump dominated the daily media spectacle with tirades against immigrants, government corruption, establishment politicians from both parties, the press, and the global economy. His clarion call at rallies was “I am your voice.” When he mentioned Clinton, the crowds ritualistically chanted “lock her up,” which he promised to do. Reporters were herded like cattle into fenced pens at rallies, and crowds shook their fists and chanted at them when Trump  denounced the lying, biased media. Reporters needed Secret Service protection at these events.

A radical right social movement against the Establishment

Through his deft use of social and conventional media and relentless appearances at rallies, Trump created a movement that revealed, like Bernie Sanders in the Democratic primaries that selected Clinton, the emptiness of the US party system. The Trump revolt echoes the rise of the radical right sweeping European democracies. Traditional parties have become “hollowed out,” in Peter Mair’s term, uninterested in engaging voters beyond crude marketing campaigns at election time. The British felt this shock with the Brexit vote, and no fewer than 28 countries in Europe have radical right parties on the rise, or already in power and threatening basic democratic values. Even though the radical left is as numerous and angry as the right, it is burdened with identity politics and the romance of deliberative democracy, which undermines conventional party organization, leadership, and the capacity to generate appealing ideas that travel via simple emotional messages.

How cosmopolitan arrogance lost the election

The specter haunting democracy today is the legacy of centrist neoliberal elites, and the press organizations that cover them. The core democratic institutions of press and politics have failed to engage white working class populations that have been economic casualties of globalization. Perhaps even more troubling is the failure of the center left and right to engage white middle classes who are more the symbolic casualties of globalization. These are the god fearing Christians for whom racial and patriarchal privilege once offered social identity and status, and who now feel threatened by multiculturalism, immigration and Islam. Yet, neoliberal politicians from Tony Blair to Barack Obama have told them that globalization is irreversible, so get over it. Clinton’s message of “stronger together” surely felt wrong to those who lived in Trump’s America and wanted to make their nation great again – in their own image.

Beyond the lying mainstream press, which Trump helped his followers deconstruct every day, Trump’s coded messages of resurgent white nationalism circulated through the alternative or “Alt” right media system in the US. This network includes radio talk personalities such as Rush Limbaugh, with 13 million listeners, who issued daily defenses of Trump’s many miscues in the final months of the campaign. Among hundreds of Alt right websites is Breitbart with 19 million unique monthly visitors.

Late in the summer, when struggling with self-inflicted damage in the establishment press, Trump picked Breitbart publisher Steve Bannon to head his campaign. The campaign media team was soon joined by Roger Ailes, who began his political career reinventing Richard Nixon for the television age, and later headed Rupert Murdoch’s Fox News channel until he was driven out by a sexual harassment scandal. Bannon and Ailes have visions of consolidating their victory by forging a Trump media network that will serve as a surrogate party organization, and bypass the mainstream press in keeping Trump propaganda flowing to supporters.

In light of these trends, it is time to ask: What is the future of democracy given the imbalance between left and right, and the disdain shown by many victorious right politicians for civil liberties, moral tolerance, racial, sexual, and religious diversity, press freedom, and basic civility? Those of us who benefit from cosmopolitan societies and global economies have failed to notice that democratic institutions of press and parties have withered, while a new and more ominous political and communication order has emerged in our midst.

Lance Bennett is professor of political science and Ruddick C. Lawrence Professor of Communication at University of Washington, Seattle USA. His most recent book is News: The Politics of Illusion (10th Edition, University of Chicago Press). He is also founder and director of the Center for Communication and Civic Engagement. and is on Twitter.