How Could the Democrats Get it so Wrong? 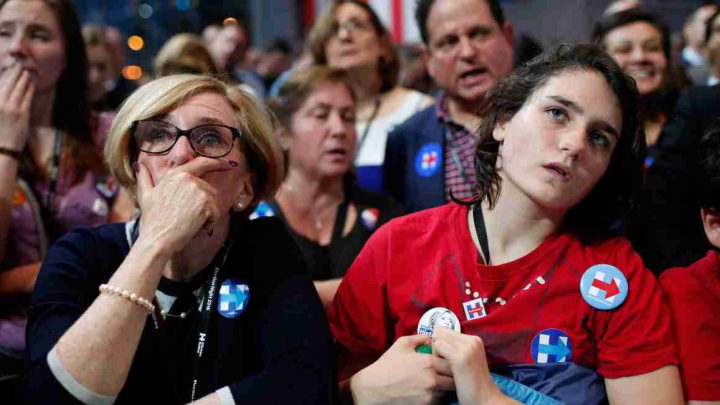 Today I heard Hillary Clinton give her concession speech after one of the most surprising electoral results in US history.  Mrs. Clinton was poised, calm and calling for her supporters to give Donald Trump a chance to lead for the good of the USA.  The facial expressions of her supporters said it all – they looked stunned, disappointed and many were in tears.

It should have been an easy win for Hillary Clinton

Hillary Clinton was supposed to have won the election by a solid margin.  Her polling figures were strong even after F.B.I. Director Mr. Comey just days before the election announced that the F.B.I. had discovered new emails that might be relevant to its investigation of her, which ended in July this year with no charges.  Mrs. Clinton was a strong and knowledgeable candidate on the campaign trail.  In contrast Trump time and time again looked like he did not know what he was doing, which made him an easy target for Saturday Night Live or other comedy shows.  Many well-known Republicans also refused to support Donald Trump’s candidacy.  The Republican Speaker of the House Paul Ryan refused to campaign with or defend Donald Trump during his presidential campaign.   Former Republican Presidents George W. Bush and George W.H. Bush refused to endorse Trump, as did Colin Powell, the former Joint Chiefs of Staff and a well-known Republican. It should therefore have been a walk in the park for Hillary Clinton.  As her ally Senator Elizabeth Warren from Massachusetts said on Election Day on local television: “Thankfully soon we will no longer have to care about what Donald Trump has to say”.  But Mr. Trump won the election carrying several states that traditionally vote for the Democratic candidate.  What went wrong for Mrs. Clinton?

This Country is More Divided Than We Thought

In her concession speech Hillary Clinton concluded with a somewhat surprised look on her face “this country is more divided than we thought”.  In contrast while her campaign may not have understood the extent of the polarization of the American electorate, Donald Trump clearly understood the strong discontent and feeling of exclusion among especially white non-college educated men.  Back in July the filmmaker and social critic Michael Moore wrote that Trump needed only to focus on the blue states Ohio, Wisconsin, Michigan and Pennsylvania and noted his theory of “The Last Stand of the Angry White Man.”  “There is a sense that the power has slipped out of their hands, that their way of doing things is no longer how things are done,” Moore wrote.

What’s the Matter with Kansas?

But why do so many Americans seemingly vote against their interest?  In 2004 the journalist Thomas Frank published a book with the title “What’s the Matter with Kansas? – How Conservatives Won the Heart of America”.  Mr. Frank asks why poor people in the heartland of America vote Republican when – at least for people of the East and West coasts of the US – the Democrats are the party for workers, the poor and the weak.  In other words, why do so many Americans vote against their economic and social interests?  Mr. Frank answers this question by examining his home state Kansas and reveals how conservatism, formerly a market of class privilege, became the creed of ordinary Americans.  This conservatism has mobilized voters with explosive social issues such as busing, un-Christian art and abortion and these issues then get married to pro-business economic policies. Add to this that in states such as Michigan and Pennsylvania traditional manufacturing jobs have been lost as factories or mines have closed downs.  Service sector jobs don’t pay as well as manufacturing jobs.  For example Wal-Mart or Dunkin Donut pay the minimum wage, which in Michigan is $8,50 /hour and in Pennsylvania only $7,25/hour.  At the same time health care costs and college tuition have soared in America. It is no wonder that white unskilled workers feel left out of the American Dream.  Mr. Trump’s promise to “Make America Great Again” resonates well in the American Heartland.

Democrats on the Coasts

Well-educated high earning Americans live in the coastal areas in cities such as Boston, San Francisco or Los Angeles – and they overwhelmingly vote Democratic. The Democratic Party also made great attempts to include Blacks and Latinos but as a commentator in the New York Times (which had endorsed Mrs. Clinton) conceded this past Sunday, Trump has done one thing right – he has acknowledged that Blacks have not gained much economic or civil rights advances in recent years and that he understands their frustration.  East and West Coast liberals have simply failed to understand the frustration of Middle America – and the majority of Clinton’s campaign staff hails from the coasts.  The Democratic campaign has probably underestimated the frustration of Blacks and Latinos because although Clinton got more votes from these two groups than Mr. Trump, she got significantly less votes from these groups than President Obama did in 2012.

The Democrats on the US coasts do not understand Mr. Trump’s supporters and sometimes live in a “bubble”.  For example my son’s great public high school in Cambridge in Massachusetts is one such bubble.  Cambridge is one of the most liberal cities in the US and is also known as “The People’s Republic of Cambridge”. Students at the high school expected a Clinton victory and almost all students supported her.  After the election result came in today, many students were grieving.  Many were crying and today’s midterm exams were postponed because too many students were psychologically distraught.  This small example illustrates how far the East Coast liberal segment is from Trump’s Middle America.

To unify America will be a long and difficult process.

Jette Steen Knudsen is Shelby Collum Davis Professor at Tufts University near Boston and a Visiting Fellow of the Velux Endowed Chair of Corporate Sustainability at Copenhagen Business School. She resides in Cambridge MA with her teenage son.