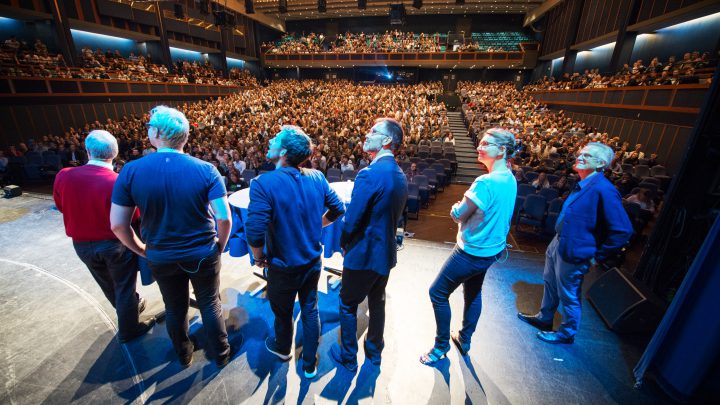 On their very first official day as bachelor students at Copenhagen Business School,  approximately 2.000 young people met at Falkoner Hall near CBS. The main agenda was to engage in a debate about what does responsibility mean for business and for a business school as well as for its students.

The case method as a mean to make responsibility more tangible

To make things a little more ”real”, a case study had been developed for this year’s batch of 2016-students. This year’s case concerned how the Danish glassblower and social for-profit entrepreneur, Pernille Bülow, over the last decade has established a business in partnership with an NGO from the Global South. The business partnership produces jewellery for the Western market and builds on a hundred year old tradition among women in Eastern Ghana of producing beads of recycled glass. Pernille Bülow has managed to re-fashion the beads into stylish jewellery designs to be sold in Europe  and as such creating local jobs for a group of single mothers in the local villages in Ghana. However, Pernille Bülow Ltd. is still a relatively small business; although it has great potential, the social entrepreneurship struggles with a number of challenges. CBS students were therefore given the opportunity to engage in a case competition with the ambition of providing advice to Pernille Bülow on challenges of scalability, internal expansion, social media and marketing.

Across 19 study programs students produced proposals for Pernille Bülow. Over100 proposals were submitted and 3 winners were identified and invited to present in front of a jury that included Pernille Bülow herself the following week and a winner was found and awarded.

A university’s responsibility: shaping leaders with a simultaneous concern for business and society

One of the most important things we do as university staff is to educate the next generation of decision makers. Many years ago, CBS students came to this institution primarily to learn how to “crack the numbers” and get the right answer. CBS has long been recognised as producing solid and capable “tradesmen”. Today this ideal has been extended to include a systematic effort to develop study programs to reflect the complexity of challenges for business navigating in contemporary society. Not only is it important for students to master the tools for profit maximization, but it is increasingly important to learn how businesses have to navigate, engage and contribute to the development of political, social and environmental challenges locally and globally. Needless to say, the understanding and support from CBS top management is crucial for carrying this message across.

Responsibility Day also provides an opportunity for students to directly address top management, an opportunity that is greatly appreciated. CBS’ management team is on stage responding to questions from students like ”How does CBS make sure that corporate partners are aligned or live up to CBS’ ethical standards for example engaging with the British American Tobacco company as a CBS partner?” and “CBS seems to be taking responsibility really seriously, but I believe it hasn’t been like this forever. So when and why did responsibility become such an important part of CBS?” CBS management responded by pointing to CBS’s longstanding tradition of research and teaching in responsible management that serves as point of distinctiveness.

While the CBS Responsibility Day does not necessarily change the mindset of energetic and hopeful young students, the hope is that it will at least make them think about the role of business in a challenged society.

Martiina Mira Matharu M. Srkoc is Head of Section, PRME and responsible for the administration and implementation of PRME.
Mette Morsing is Professor at the CBS Center for Corporate Social Responsibility and researches Business and CSR / Sustainability, Governance and CSR, Communication studies, Organization theory and Identity-image relations.