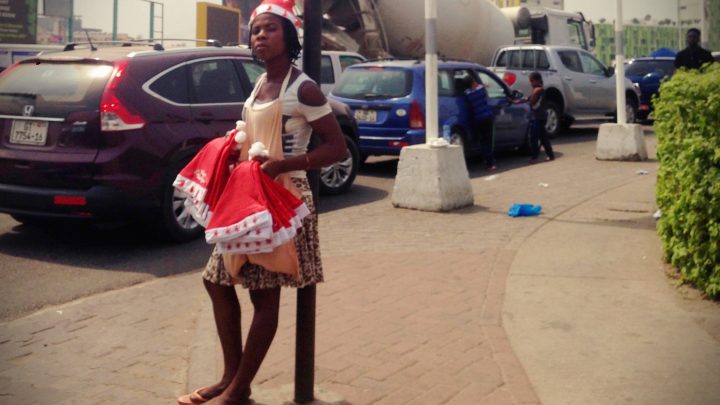 Africa is teeming with business activity managed by young people. In cities and towns, young traders are touting their goods in traffic jams, trying to sell everything from phone credits and toilet paper to drinking water and Christmas decorations. Alongside streets and pathways, young people sell a variety of items and foodstuffs from table tops or shacks. In neighbourhoods, women operate hairdressing salons and dressmaking shops often from their homes, whilst young men carve wood and fix electrical equipment. In the busy market places, young women and men trade a variety of goods including locally grown fruits and vegetables, imported new and second-hand clothes, shoes, mobile phones, and housewares. Some young people offer inventive services as and when the need arises; young men fill in potholes on the roads, hoping that passing vehicles will acknowledge their work with a token payment, while others rent out gumboots to pedestrians who seek to pass flooded streets. Others again act as ‘traffic police’ when narrow roads become jammed with cars, motorbikes and minivans.

Everyday Forms of Entrepreneurship
Such entrepreneurial practices might seem mundane, trivial, or insignificant when compared to instances of high-growth and high-tech entrepreneurship in the global North. And some might even dispute whether these types of income-generating activities should at all be labelled entrepreneurship. Yet such “everyday forms of entrepreneurship” (Welter, 2017) are significant since they currently provide livelihoods to a large proportion of the youth population in sub-Saharan Africa.

In the book ‘Young Entrepreneurs in Sub-Saharan Africa’ (Gough and Langevang 2016), we examine the rates, characteristics and experiences of young entrepreneurs in Ghana, Uganda and Zambia. Drawing on surveys conducted by the Global Entrepreneurship Monitor, we show how African youth are the most entrepreneurial in the world with around 40% of young people in Ghana, Uganda and Zambia being involved in “early state entrepreneurial activity” (which includes young people aged 18-35 setting up a business or running a business less than three and a half years old). These levels are equal to or higher than the adult population in their respective countries, and much higher than their youth counterparts in other regions of the world where average rates range from just 9% in Europe to 18% in Latin America.

Youth Entrepreneurship in Africa – Promises and Limitations
At first sight these high rates of youth entrepreneurship might look encouraging for African governments and international development organisations, which are increasingly promoting youth entrepreneurship as a solution to the mounting youth unemployment crisis. Whilst Ghana, Uganda and Zambia, together with a number of other African countries, have experienced high and sustained economic growth rates during the last two to three decades, the growth has not generated adequate, decent jobs. In a situation of very limited wage employment, and a rapidly growing youth population, young Africans are increasingly encouraged to change their mind-set from being ‘job seekers’ to becoming ‘job creators’ and are hard pressed into using their entrepreneurial ingenuity to start their own businesses as a means of creating livelihoods for themselves.

When looking closer at the statistics and listening to the experiences of young people, however, the picture is mixed. While entrepreneurship rates are high and the attitudes to business start-up very positive, a common characteristic of African young entrepreneurs is that their businesses stay at the micro-level and are concentrated in the informal economy, hence lie outside the protection and regulation of the state. Their businesses are concentrated in a limited number of vocations, with the majority engaged in trading or providing similar services. Competition is, therefore, cutthroat and earnings minimal. Noticeably, the majority of young entrepreneurs have no or only a small number of employees, which means they contribute little to job creation apart from self-employment, have low expectations for growth, and their businesses close down at a high rate.

Consequently, we should be careful not to celebrate youth entrepreneurship uncritically. It is important to acknowledge that not all young people have the skills or resources required to pursue viable entrepreneurial ven­tures. Indeed, most young people in Africa currently appear to be poorly equipped to become successful entrepreneurs in the sense of establishing durable businesses and growing them. There is also the risk that an excessive focus on entrepreneurship becomes a way to blame young people themselves for their misfortunes and provides an excuse for states not to deliver welfare services and ensure decent jobs (Jeffrey and Dyson, 2013).

No Silver Bullet for Tackling Youth Unemployment in Africa
So far the strong policy discourse on entrepreneurship in Africa has not been backed by adequate support measures. While the book reveals that the three African countries have all witnessed a similar mushrooming of entrepreneurship promotion schemes initiated by governments, NGOs and international development organizations, the general picture emerging is that youth entrepreneurship promotion is characterized by many uncoordinated schemes, which tend to have limited uptake and scope. Moreover, there tends to be a quite narrow focus on promoting business start-ups through providing finance. While more holistic approaches to entrepreneurship promotion are clearly needed it is equally vital that entrepreneurship is not singled out as the only solution to the youth unemployment crisis but rather is seen as just one element of broader labour market policies, which cannot themselves be separated from wider policies aimed at stimulating job-generating, inclusive, and sustainable economic growth and development.